Skip to content
Book Reviews
Freethinker
Angelo Soliman, Ferenc Kazinczy, Gergely Péterfy, Sophie Török, The Stuffed Barbarian, Vienna
With this post I am launching a series of Masonic Book Reviews. I planned it for a while and now the “critical amount” has accumulated and here goes the first piece of this section. I apologize to my readers who speak only English – sometimes I will review even books written in other languages. Not to annoy you but trying to share information about books from other cultures. Here is the very first one: a novel, The Stuffed Barbarian written in my mother tongue, in Hungarian, by a writer and researcher, Gergely Péterfy.

Imagine that we are just a few years after the formation of the famous Premier Grand Lodge in London (1717) and somewhere in the distant African continent a little black boy is born, probably in today’s Nigeria and in the year when said Grand Lodge commissioned a certain Mr Anderson to write the Constitution (1721) of the Craft.

The boy was taken as a slave to Europe and after many unbelievable adventures while serving in the households of several aristocrats in Marseilles, Sicily, Vienna he will become something unexpected for those times. From being a sex toy for some of his owners he ascended to unusual social status in the imperial court in Vienna: being one of the most educated individuals of his time, he married the sister of a marechal of Bonaparte, and was employed as an expert at the Imperial Natural History Collection working with the famous Freemason and Illuminati Ignaz Born (side note: another Transylvanian as the author of this blog). He, the black man, known by this time as Angelo Soliman joined the Masonic lodge “True Harmony” and eventually become the Grand Master of the lodge. Among the members were W.A. Mozart, J. Haydn and a Hungarian poet, Ferenc Kazinczy. This latter will become a central character in the book we are going to present. Kazinczy became a good friend of the exotic brother and they have met several times in the Hapsburg capital – where they both have been regarded as outsider “Barbarians”. Maybe that was one more thing they had in common… 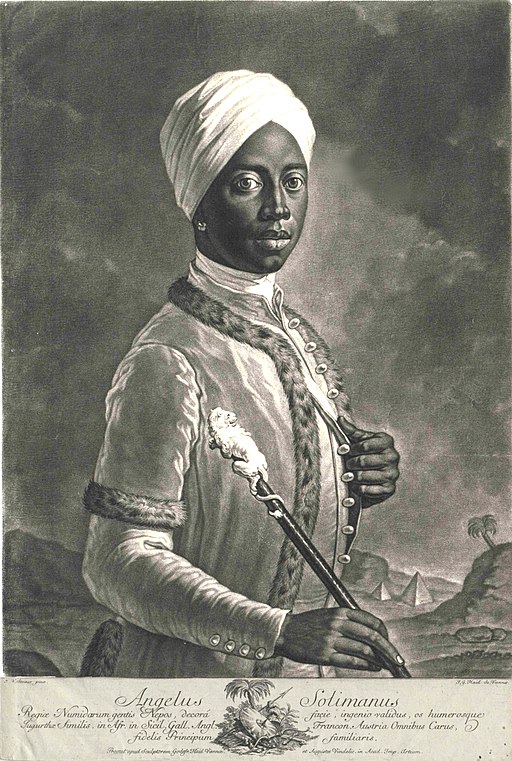 Soliman died in 1796, and a year before that Kazinczy, due to his participation in a half-baked ‘conspiracy’ organized by a Jesuit monk, physicist and professor converted into imperial police spy, was sentenced to death, later changed to life imprisonment. However, he received amnesty in 1801 and returned home. Even before getting involved in that conspiracy he was mentored in many regards, including Freemasonry by count Lajos Török, a renowned alchemist and Mason, and a few years after his liberation he married the count’s daughter, Sophie.

Countess Sophie Török, Ms Kazinczy is the narrator of the novel written by the Hungarian writer Gergely Péterfy. Sophie recalls the stories her husband told her before dying in the 1831 cholera epidemic.

In the book she is standing in the attic of the Natural History Museum in Vienna looking at the stuffed skin of Angelo Soliman and recalls all the terrifying events told her by Kazinczy. Because when Angelo Soliman died they didn’t bury him as a Christian what he was: the imperial doctors skinned his body – the event was witnessed by Kazinczy, brought there from the prison to be present at this horrifying operation done during the night – and later it was stuffed and exhibited there in the Museum as a representative of the African race. His daughter was asking repeatedly the Emperor to let her bury the father’s body, and she never got the permission. The “mummy” burned during the revolution of 1848.

Kazinczy, our main character in the book titled “The Stuffed Barbarian” could never recover from that night when by his presence, as a friend and Masonic brother, he assisted in this morbid ceremony of skinning and stuffing his friend and brother.

The author wrote a PhD thesis based on his research in Austrian and Hungarian archives (it is also available online in Hungarian) although the main “byproduct” of that research is the novel. A lot of facts are based on historical data. And then the fiction writer steps in and creates the fascinating story of what Soliman told to Kazinczy…

Narrated by Sophie Török, the wife of Kazinczy, the novel has an interesting double twist: we learn the story of Angelo, the noble savage as he was considered in that time, from the stories narrated initially by Kazinczy to his wife, and then she remembers those as an inner monologue while standing there in the attic of the Museum watching the stuffed mummy of her late husband’s late friend. There is a third Hungarian in the story as well: sometimes the author takes over the narration to let us know what is going on at Kazinczy’s estate, planned as a model home for classicist elegance to be destroyed by debts and the parochial circumstances of a feudal society.

The couple’s life wasn’t happy, they had constant financial difficulties and even their many children were estranged and raised by others at the end. However, that is not the main story – which is instead the Masonic relations with Sophie’s father and with Angelo Soliman, the memories of the prison and of the death sentence, the constant conflict between the dreams of an ideal life of poetry and music and class crushed by the realities of the early 19th century’s Northern Hungary.


The novel has many layers and uncomfortable messages even for today’s reader: acceptance and strangeness, insiders and outsider “Barbarians”, human and inhuman relations…

Soliman’s fate puts at unease people in Vienna even today. Nobody likes to talk about it. The “Moorish brother” that ended up stuffed next to a zebra as an exhibit in the natural museum, where he previously was a learned contributor is on the verge of absurd. Even the most modern enlightenment of the Age of Reason had its own limits: one Barbarian stuffed, the other exiled and both humiliated. In life or in death.

A personal sidenote: as everybody else who finished his schooling in Hungarian language, I’ve learned a lot about this (Hungarian) poet and the most important personality of the language renewal “reform” at the beginning of the 19th century. The modern Hungarian language it is what it is due to his efforts, so he became a kind of revered ‘statue’ of our cultural history. However, and the author also said this in an interview, nobody ever told us that Kazinczy has had a black Masonic friend in Vienna – this detail of his life was completely left out from the official history. It seems the author was just as shocked by this discovery as I was…

Readers that understand German are lucky: the German translation of the novel is in work. Unfortunately, there are no plans yet for an English version… I am sure it would be a fascinating read – even if the translator would have to add millions of footnotes and end-notes.

One thought on “The Stuffed Barbarian”